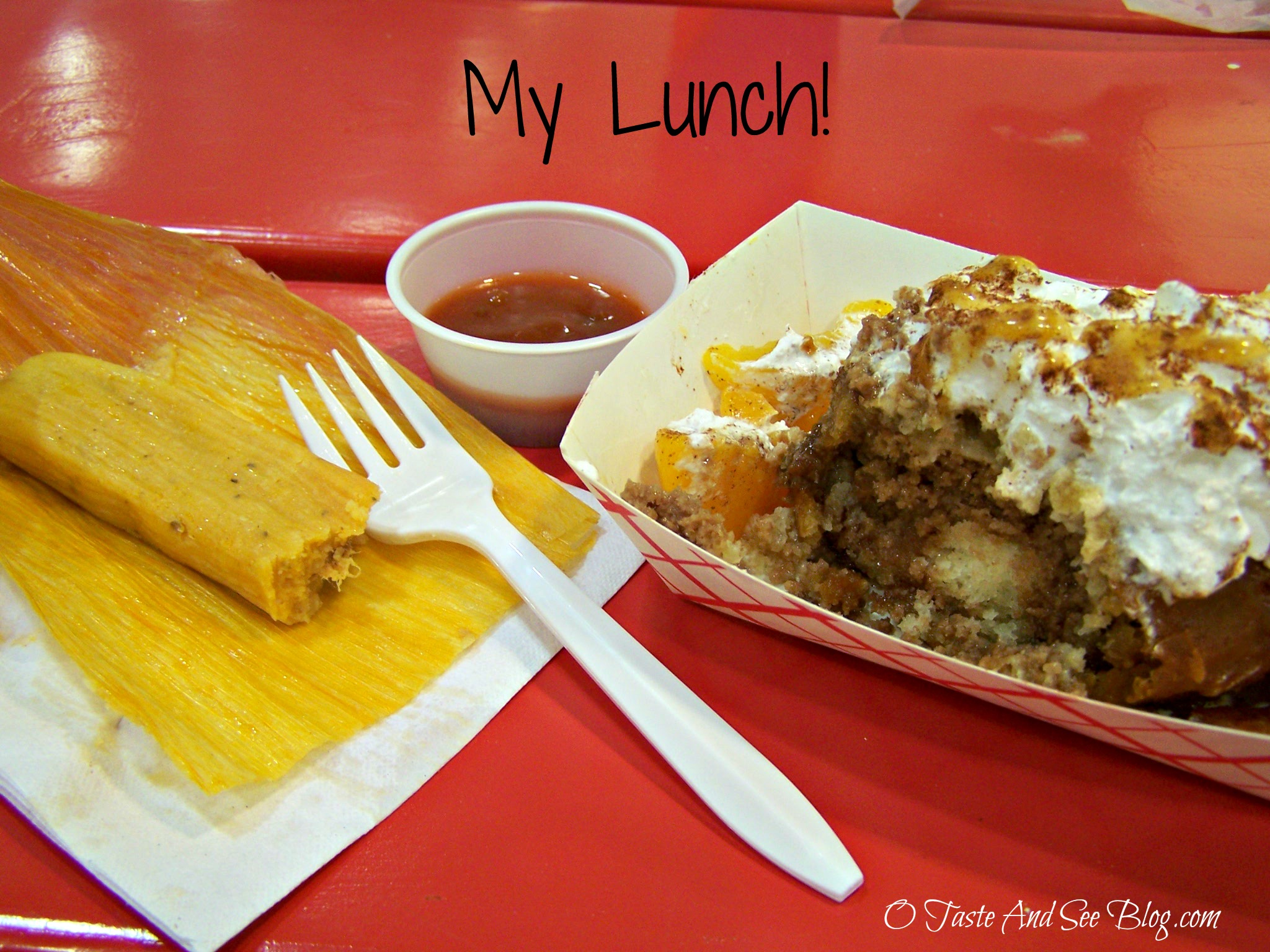 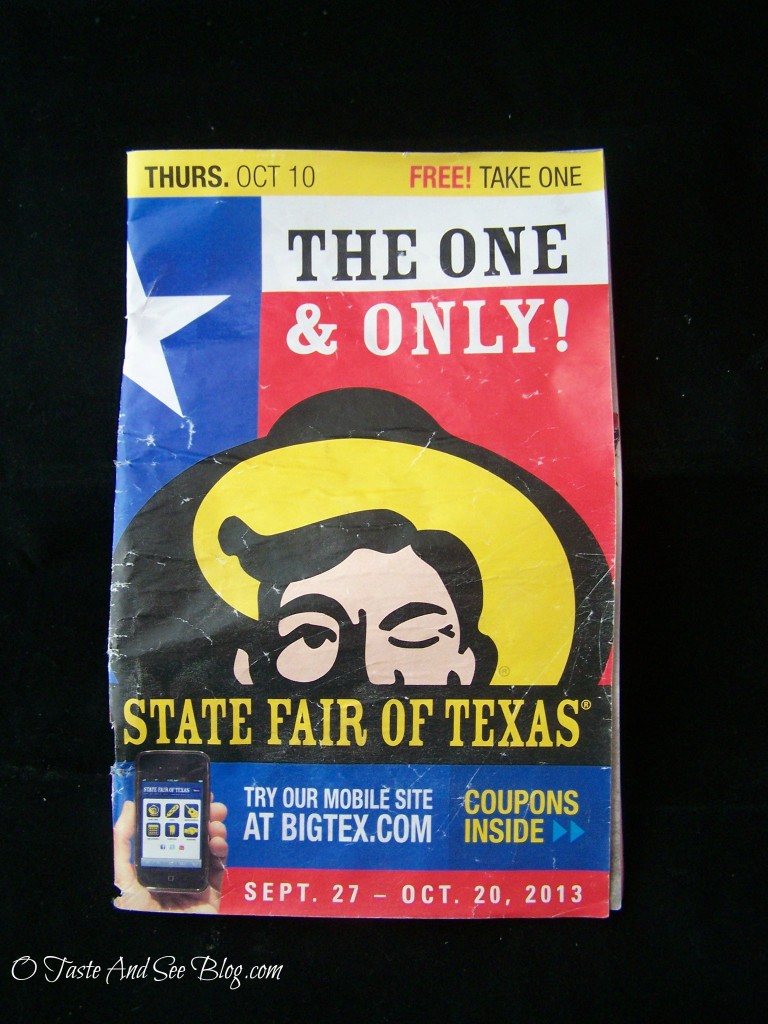 The Texas State Fair AKA The Fried Food Capital of Texas

Our family has a Tradition of going to the State Fair every other year, and this was our year to go.  We took the day off work and school (don’t worry we home school… no truancy laws were broken) and made a day of it.

The Texas State Fair is like no other place I’ve ever been.  Of course, they have the typical fair attractions like the midway and exhibits but the REAL draw is the FOOD…FRIED FOOD…and TONS of it! I’m not talking about your ordinary fried food like chicken and french fries, although they are there, I’m talking about Texas fried food…everything from Corn Dogs to Twinkies.  That’s right…Fried Twinkies!  You name it, they fry it….literally…and that’s the thing we look forward to the most!  Our goal is to try as many of the Fried Foods as we can.  Basically, we just eat our way through the Fair.

We get online ahead of time and see what new foods are going to be there.  Then we can have an idea of what “old favorites” we want to get as well as which new ones to try.

I must say at this point…we ate A LOT more food than I took pictures of.  We aren’t real good about waiting (or remembering) to take a picture when yummy food is sitting in front of us. 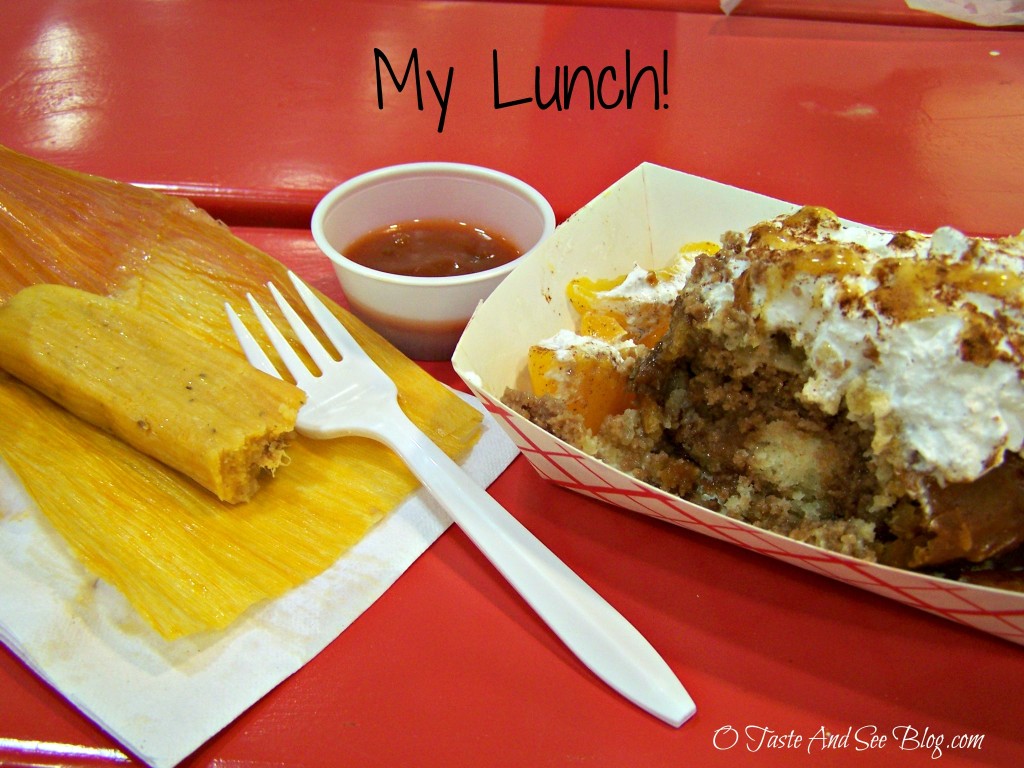 After visiting a show and looking at an exhibit, we decided it was time for lunch.  Food is everywhere but we decided to go to the “food” building where there is seating.  After a couple of laps around, it was decided..tamales for my daughter, our friend, and me… Fried Frito pie for our oldest daughter…Funnel Cake for our son  (Yes, our son JUST had funnel cake for lunch…it’s the Fair!)… and my husband decided to hold out until we found the Deep-Fried Cuban Roll, which he found and ate as we waited for the Bird Show.

As we were strolling around deciding on lunch, these words caught my eye, “Divine Deep-Fried Tres Leche Chocolate Cake”.  I love Tres Leche cake, so I knew right away I HAD to try it!  Notice, it is considerable larger than my tamale.  I did share some of it with the rest of the family. 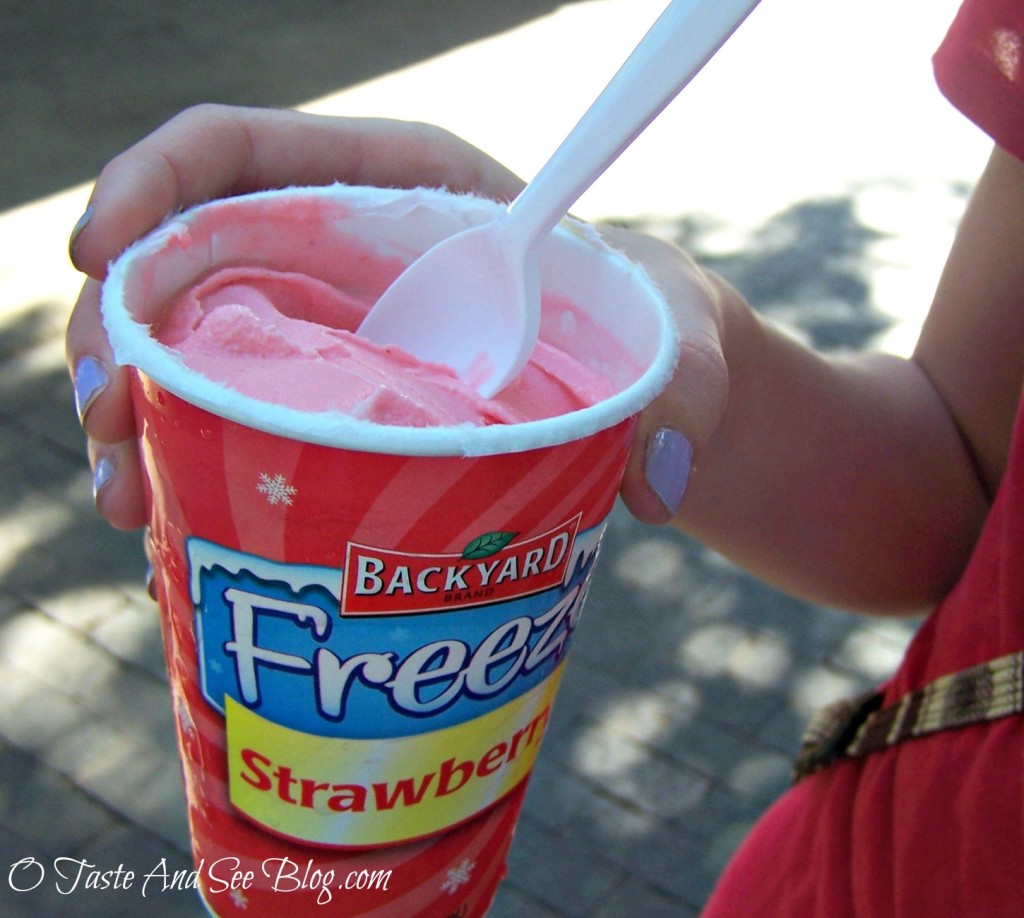 After sitting in the sun to watch the Bird Show we were extremely hot.  This Strawberry Freeze was very refreshing…and not fried. 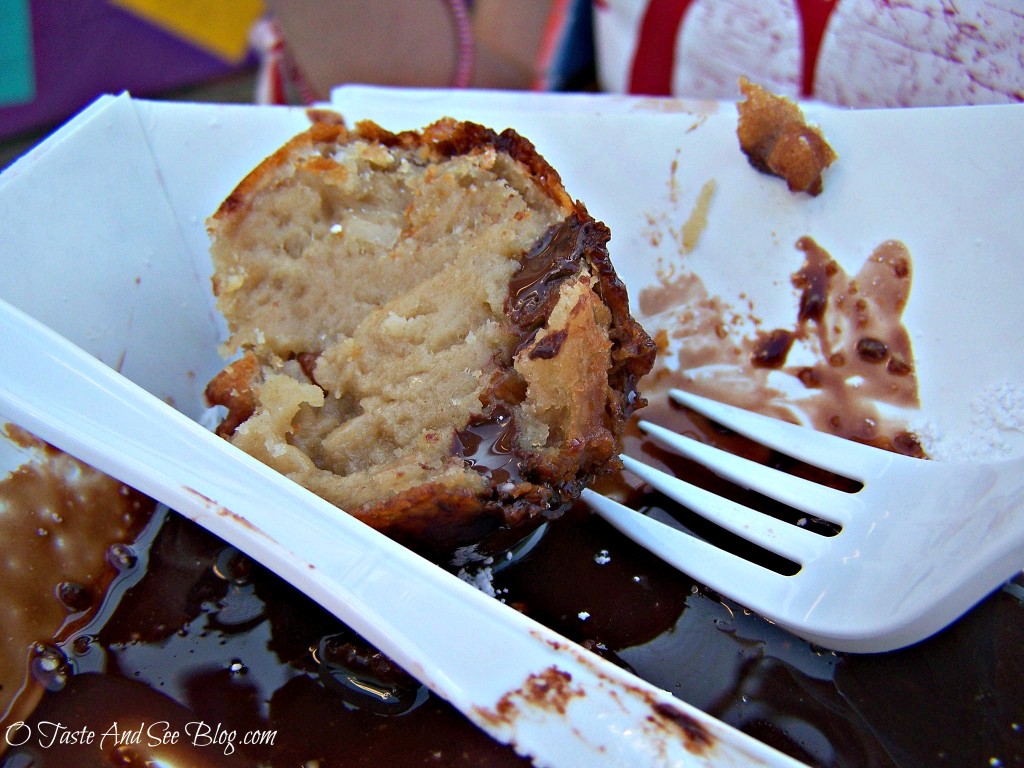 This is a favorite of our middle daughter…Fried Cookie Dough.

Somehow they take Cookie Dough, batter it and fry it…without cooking the center..then sprinkle it with powdered sugar and drizzle it with chocolate sauce.  It comes with three balls of dough and it’s very sweet so we all shared it.

Other things we shared throughout the day were the Deep-Fried Chocolate Chip Burrito and Fried Brownies.  Our friend had the most popular State Fair food, a Fletcher’s Corny Dog. It’s a well know fact that Corn Dogs were invented by the Fletchers at the Texas Sate Fair way back in 1938. Although, Wikipedia says that “there is some debate as to the exact origin of the corn dog”.  Clearly, Wikipedia isn’t from Texas! 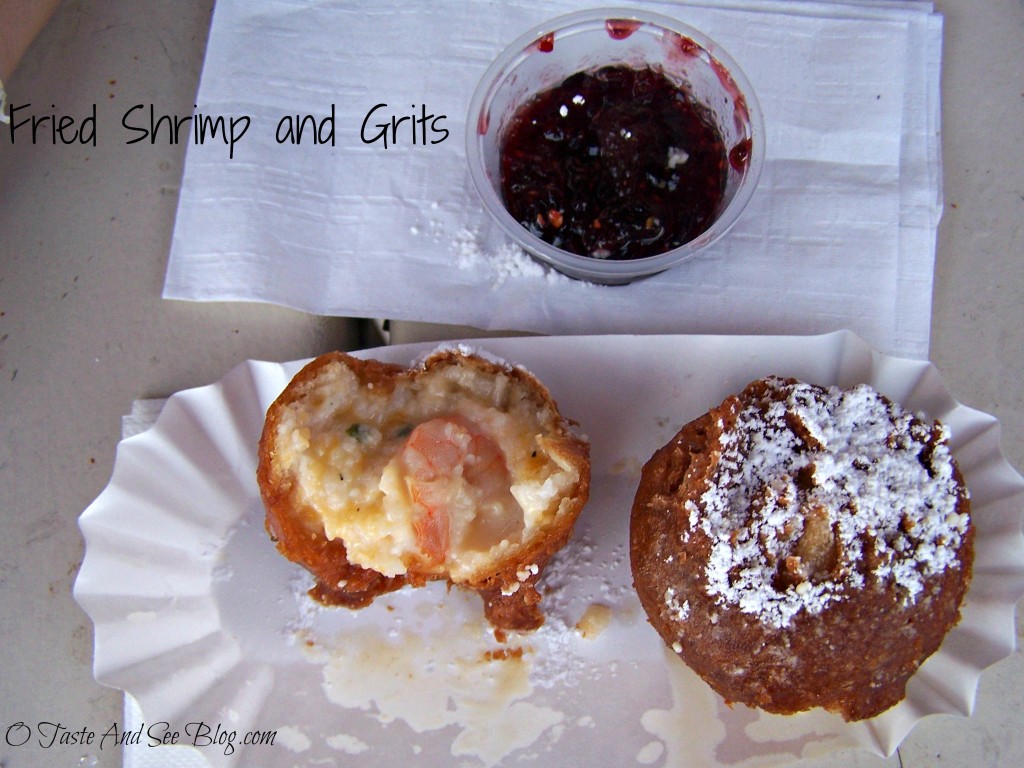 A few hours, several exhibit halls and some shopping later we were making our way to the gate to leave but still had a few tickets in our pocket.  I chose to try this new item, Deep-Fried Shrimp and Grits. It was interesting to say the least. 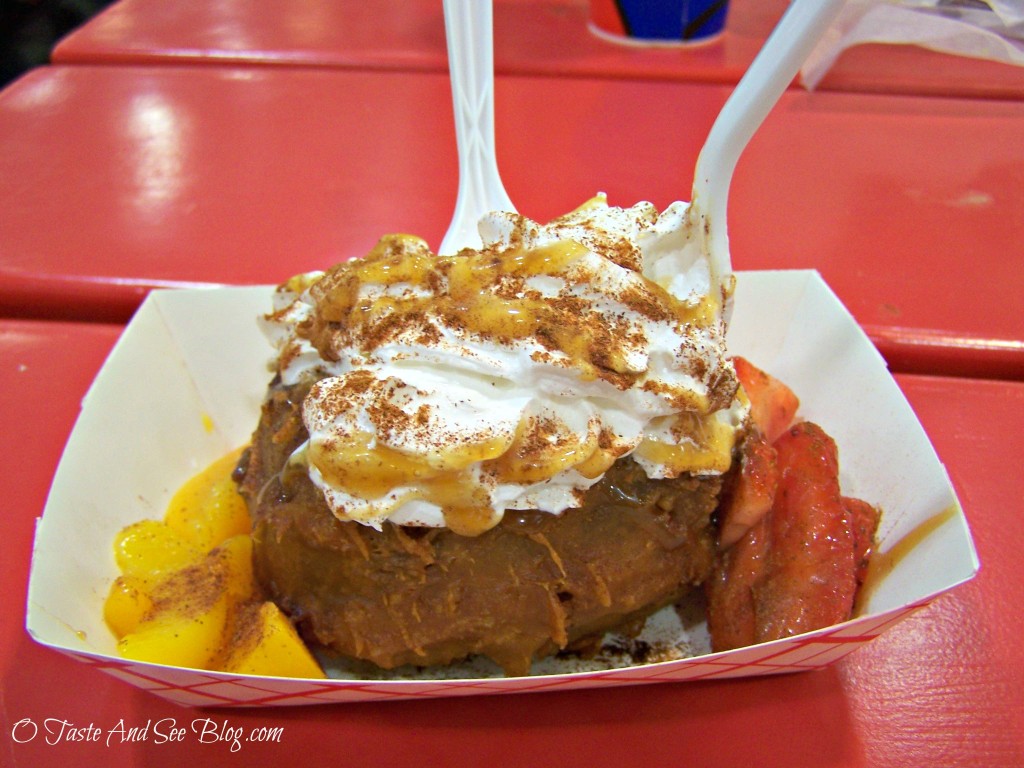 I don’t know if I can wait two more years for more!