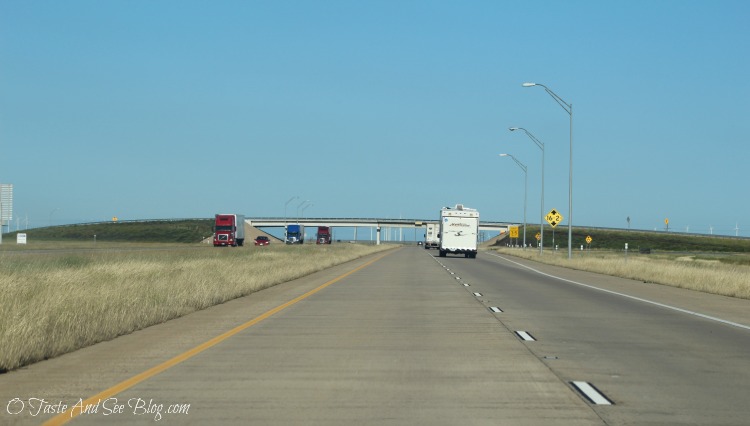 It’s been a long time since I’ve been on a road trip and I’ve missed traveling.  When I was invited to attend the Albuquerque International Balloon Fiesta I was SUPER excited!  My son and I decided to make it a Mother-Son Road Trip.  It was so amazing, I hardly know where to start!

Often, the best place to start is at the beginning…so, here we go.

Our home is about a 10 hour drive from Albuquerque, if you minimize stops.  Being the only driver, I knew I couldn’t make a trip that far in one day so, we decided to stop about half way.

On previous road trips, our family has made it a point to get a fairly early start.  Since we were only going about 6 hours we decided as long as we got to the Chick-fil-a near our house before breakfast ended, we’d be good to go.  So, after packing the car, stopping for breakfast, and running by to see my folks….we finally got on the road about 10 am.  As we like to say in our family, “We were off like a herd of turtles.”

Once on the road, to pass the time we read license plates and made a list of all the different states we saw.  This is something my son loves to do on trips of any length.  It really was fun and interesting to see how many we could find.  On the trip out we recorded all 50 states (yes, even Alaska and Hawaii), District of Columbia and 4 Canadian provinces.  It was very exciting….but didn’t really leave us anything to do on the way home. 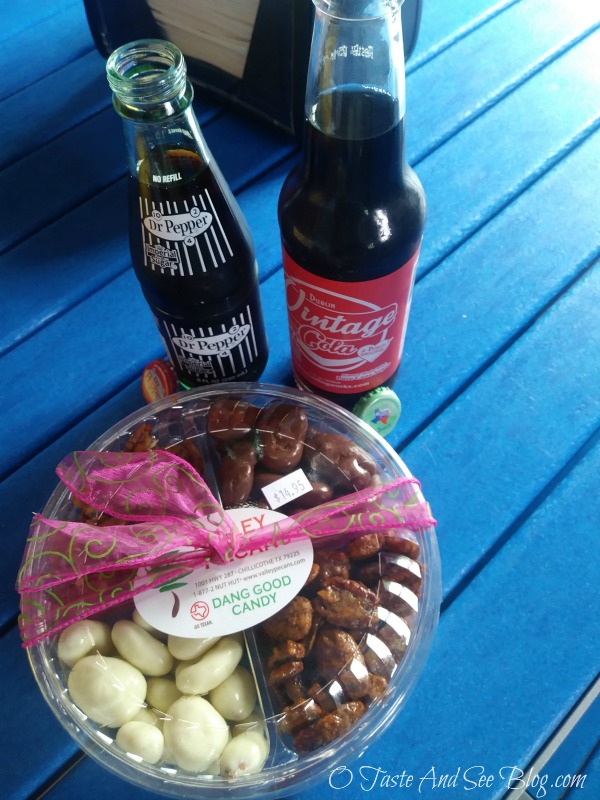 Along the way we stopped in Vernon, TX for some Texas favorites… pecan candies, Vintage Cola and Dublin Dr. Pepper.

Our intention was to spend the night in Amarillo, Texas, arriving early enough to visit Palo Duro Canyon and Cadillac Ranch.  Unfortunately, about an hour or so outside Amarillo it started raining.  They had obviously gotten a TON of rain before we arrived because when we got there it was A MESS!  Cadillac Ranch was FLOODED! 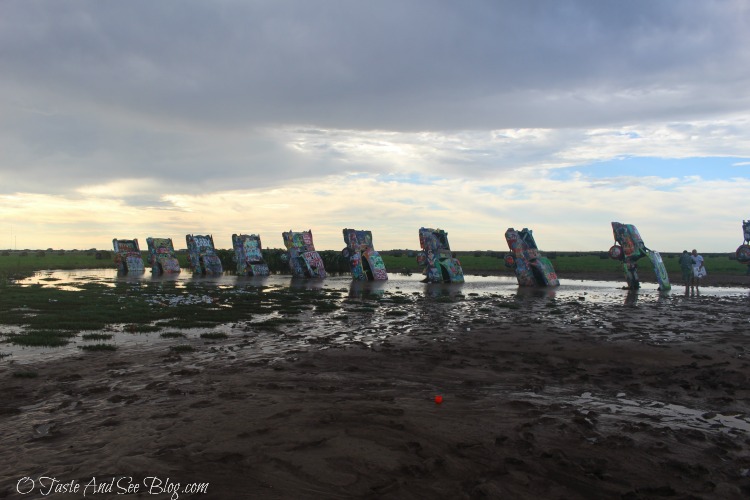 It looked more like the cars were nose down in a lake than in a field.  We did tramp out there and got our shoes COVERED in mud.  Seriously, there was so much mud we couldn’t even clean them off anywhere.  Thankfully, we had a couple of plastic grocery bags in the car.  We put our shoes in them and cleaned them up when we got to Albuquerque.

Well, there was still Palo Duro Canyon.  But, we had taken a little too much time along the way and arrived at the Canyon about 30 minutes before the visitor center closed.  At that point we decided to go to dinner and try again on the way home.

It was pretty early and we didn’t want to just sit around the hotel room and watch TV all evening so we decided to make a Wal-Mart run and look for a new game.  We picked up the Farkle.  (A dice game)  My son had never played so I had to teach him.  BIG MISTAKE!  We kept a running total of wins and losses for the week and let’s just say…he killed me!

I must admit, many things did not go the way we planned on the first day and I was a little concerned that this was “setting a tone” for the rest of the trip.  But, we enjoyed the drive to Amarillo and although we didn’t see the things we had hoped on that day, we did see some pretty cool “Texas” sites.

Today’s pictures are things we saw while traveling from Ft Worth to Amarillo.  I’m calling them

“You know you’re traveling through Texas when…” 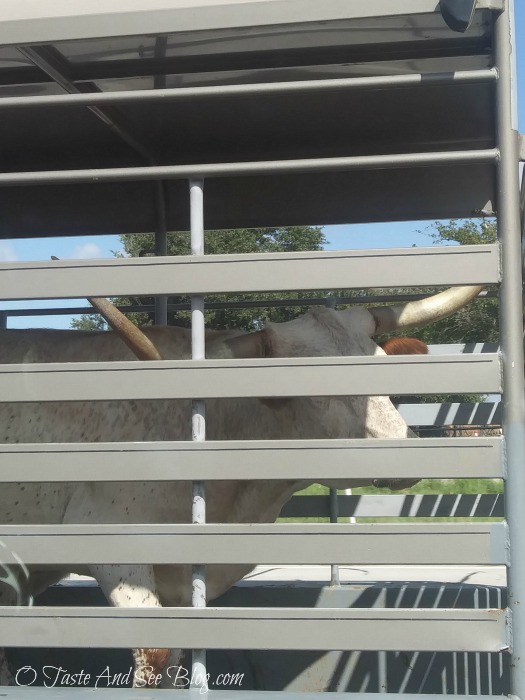 You pass a trailer full of Longhorn cattle 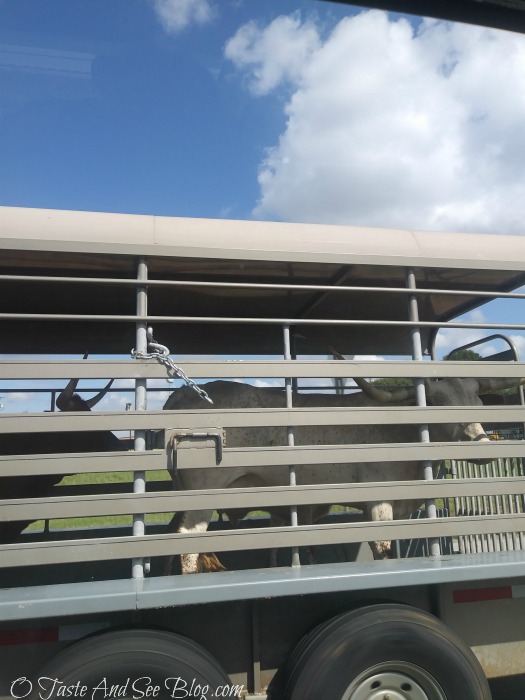 And by “full” I mean two.  Those horns take up a lot of room! 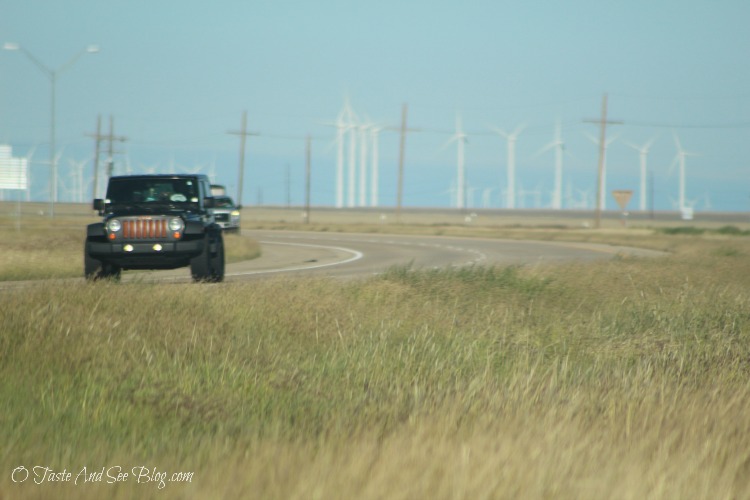 You drive through miles and miles of very flat land and very large wind mills.

You spend the night near The Big Texan Steakhouse (which you’ve seen signs for about every half mile since you got outside Ft. Worth), home of the famous 72 oz steak…Free…IF you can eat it ALL with the sides in less than an hour 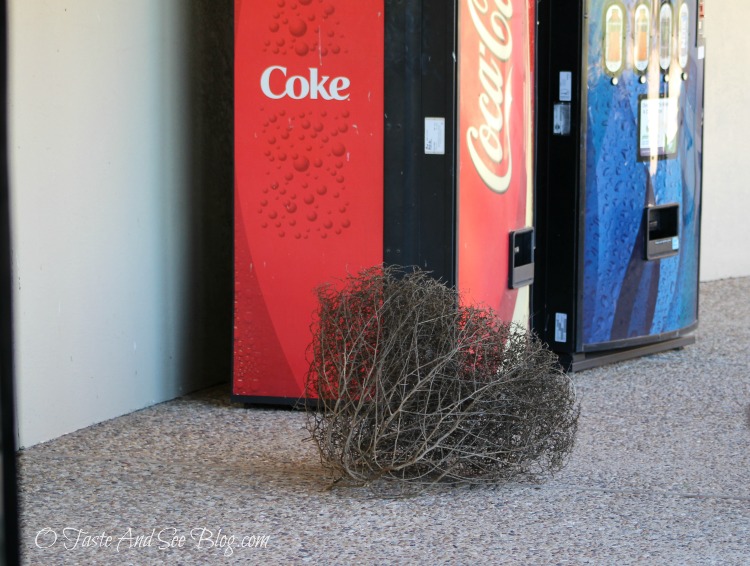 And my personal “favorite”…… 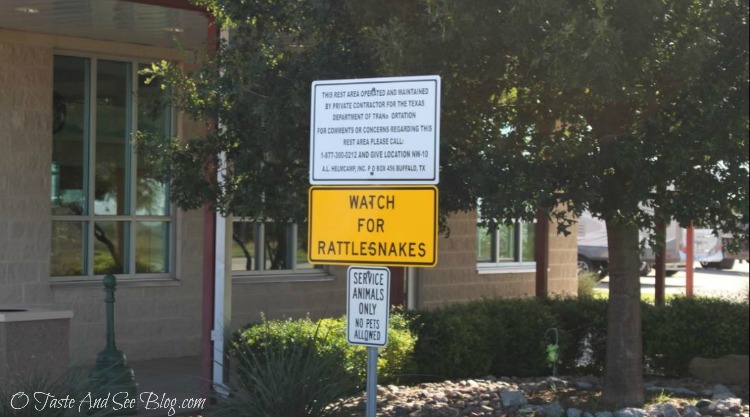 The “Watch for Rattlesnakes” (YIKES!) sign posted clearly in front of the walkway of a lovely Texas rest area, complete with fence playground and mini-museum inside.

Even though our plans didn’t work out quite as expected on Day 1 it was still a great day.

Just gonna go ahead and give you fair warning.  My son became the “official photographer” on this trip and did a great job.  He took over 2,000 pictures so just be prepared!