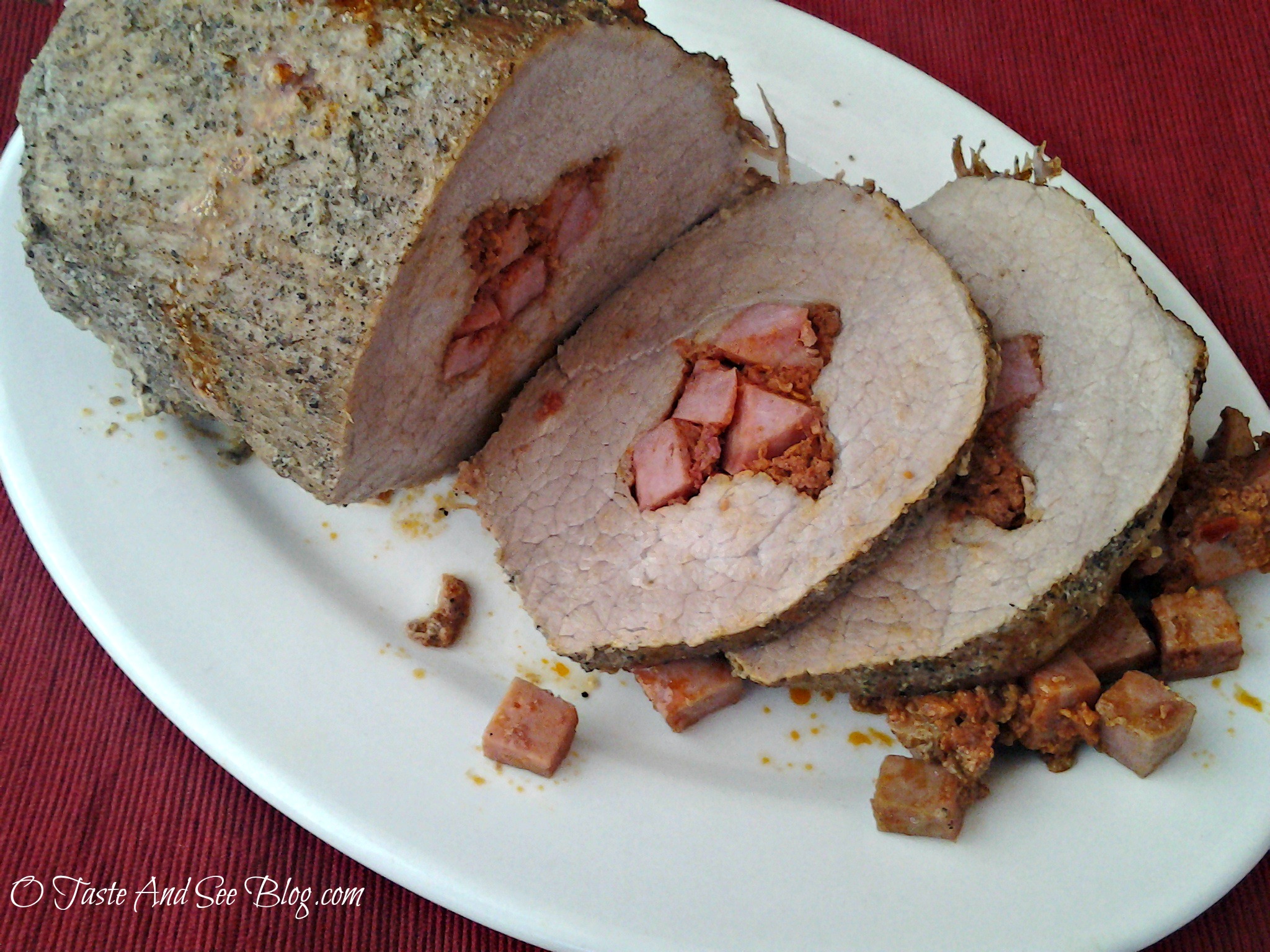 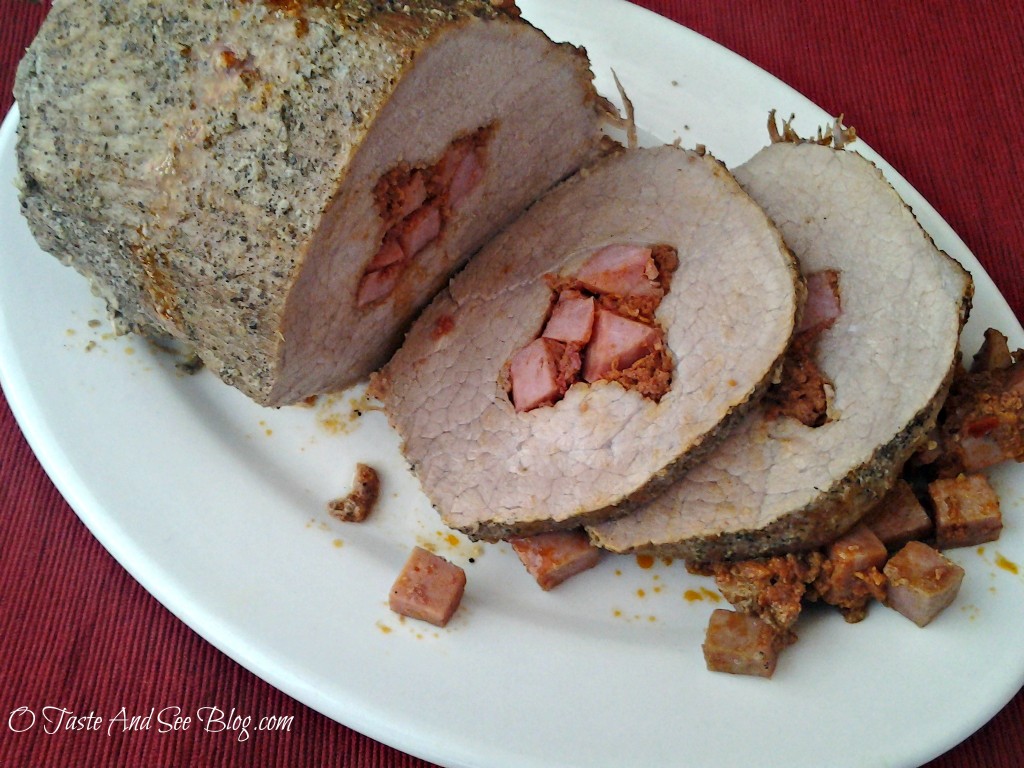 This week I’ve been talking about how we celebrate birthdays.  So far I talked about where we went out to eat and the birthday cake. Now it’s time for the Birthday Meal at home.

Since most of our Birthday Traditions involve food, we can’t do ALL of them on the same day.  We went out for dinner on his birthday, so we had to plan the “at home birthday meal” for another day.  My daughter and I had a big face painting gig (yes, that’s what they are actually called) on Saturday and we have lunch with our church family on Sunday, so the birthday meal had to wait until Monday.

My husband almost always requests the same meal….Boliche (Bo-lee-chee).  You may be asking, “What is Boliche?”  It’s a Cuban Roast made with Eye Round, stuffed with Chorizo sausage (also Cuban) and ham.  I had never heard of it until I met my husband.  He grew up in Tampa where there are a lot of Cuban restaurants. When his family moved away, his mom learned to make some of their favorite Cuban dishes. This is one of them.

I must tell you…this does not fall into the “quick and easy” dishes I often post.  It is a little more involved and takes a while to cook. Also, there are a lot of picture here to help explain the process…most involving raw meat.  My husband thinks raw meat pictures are a little …well, gross…but it’s sometimes easier to show things than try to explain them.

Also, we have lived in areas of the country where it was hard to find Chorizo, so depending on where you live you may have to ask around.  Now, I live in Texas and it’s at all the stores…Yeah! (though Mexican chorizo seems to taste a little different than Cuban chorizo) 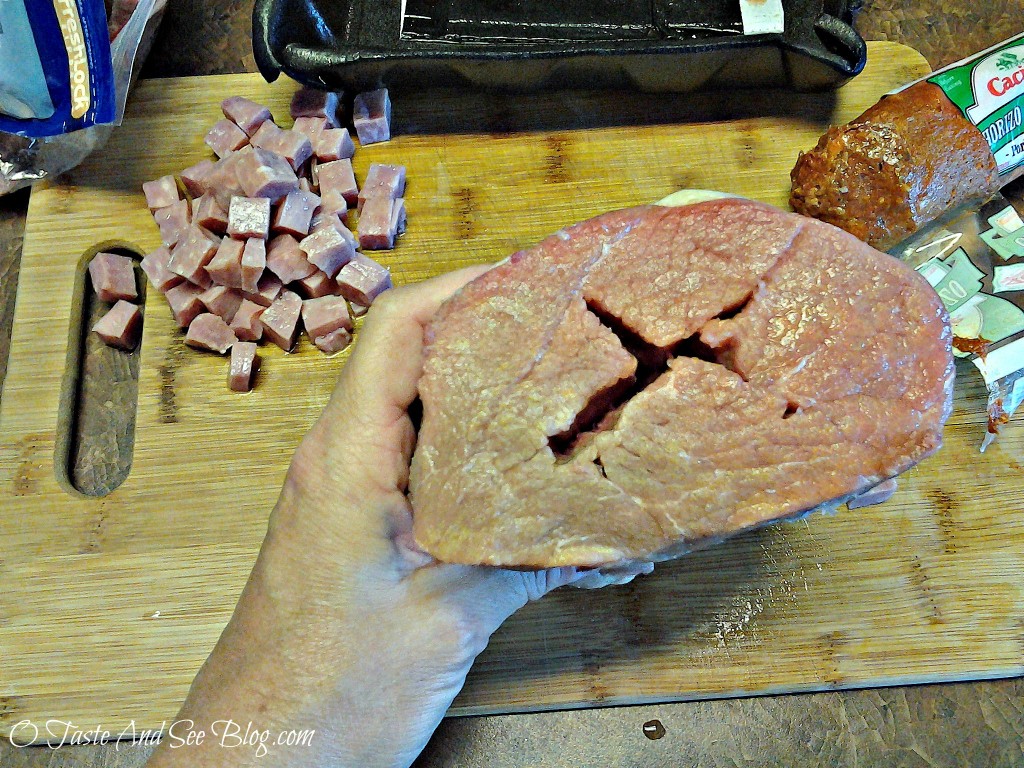 First, with a long, sharp knife cut an “x” shape into the wider end of the eye round roast 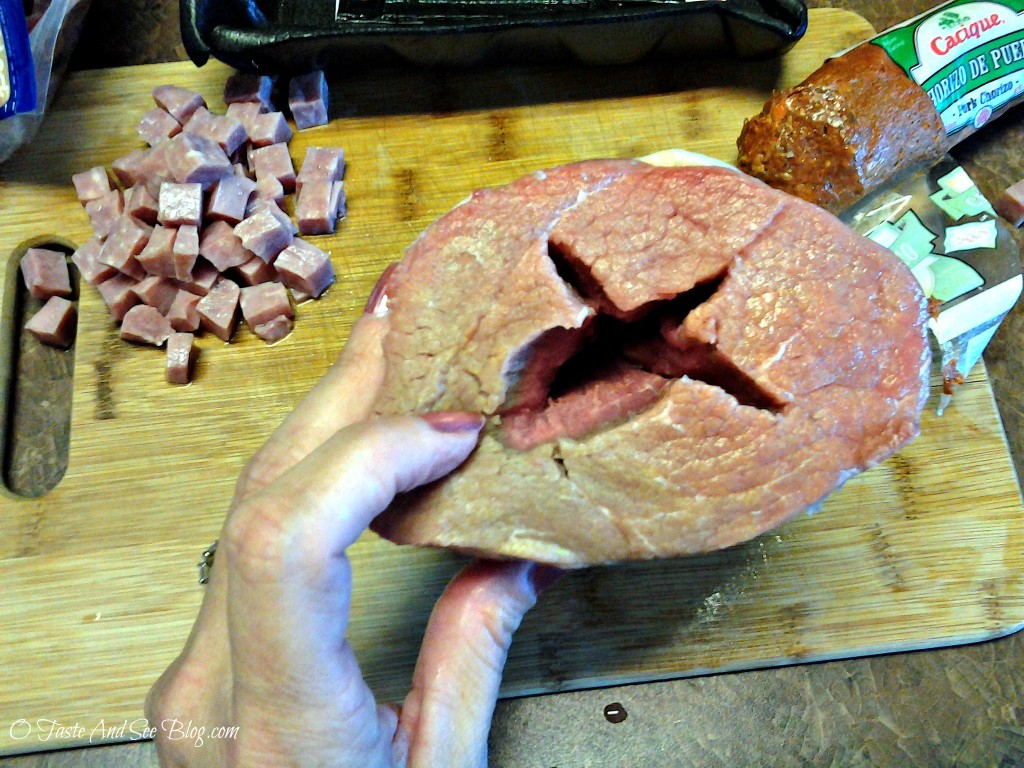 DO NOT cut all the way through, your stuffing will leak out the back if you do 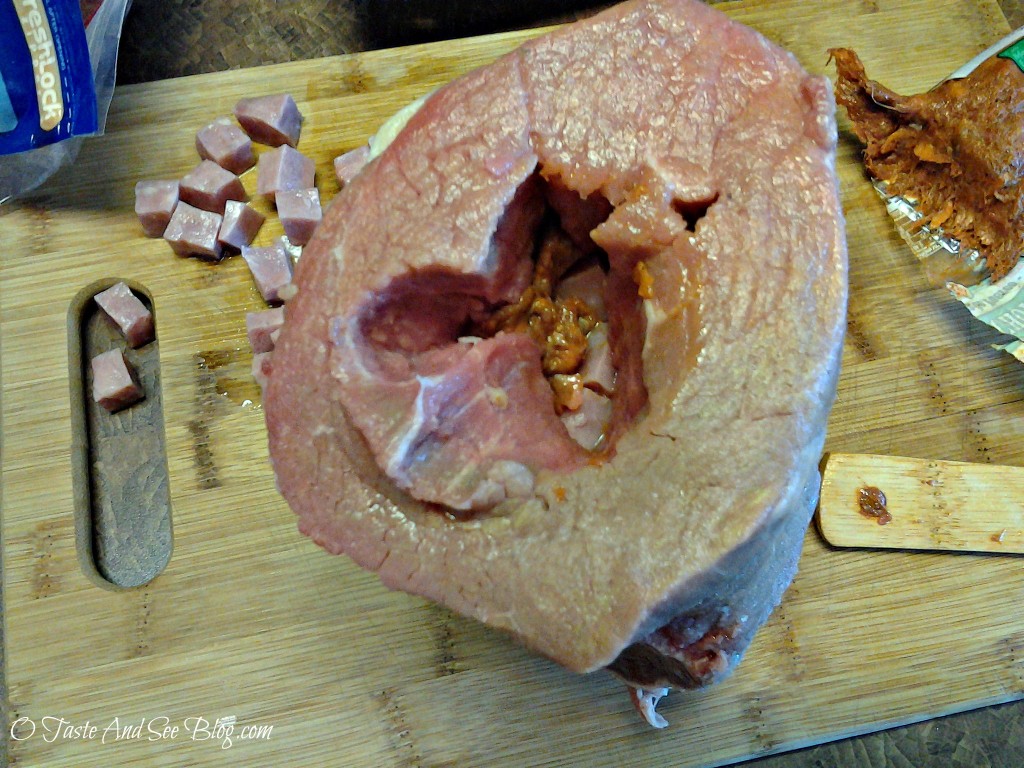 It needs to be packed in pretty tightly.  I use the handle of a wooden spoon to pack it 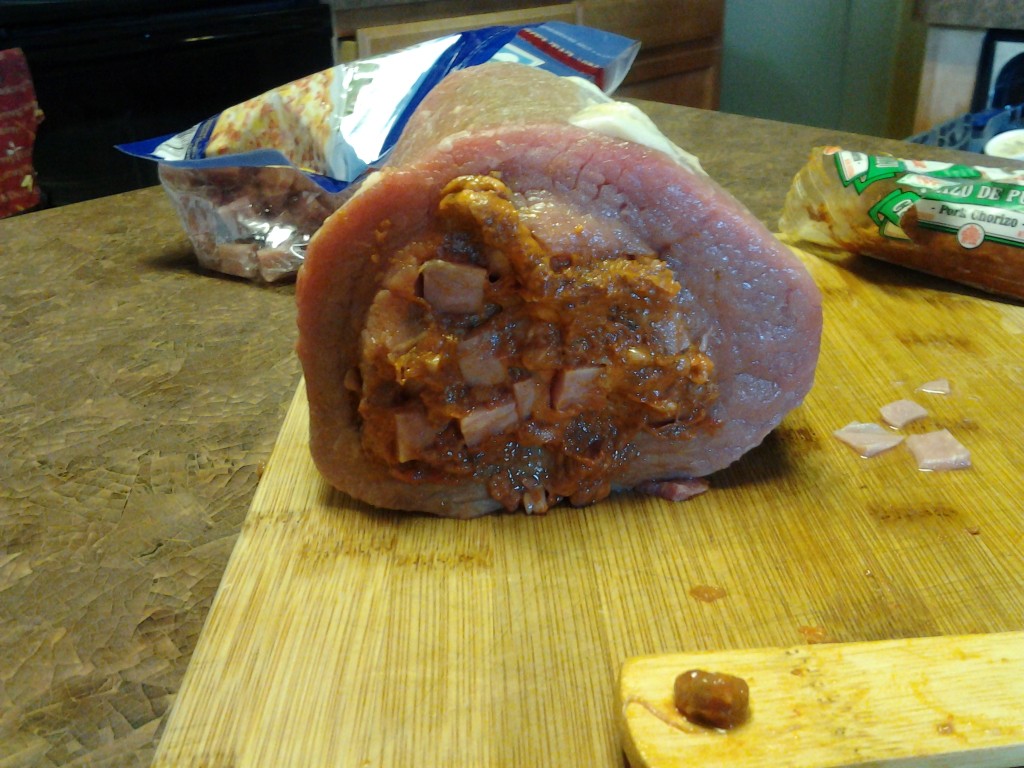 Depending on how large your roast is, you may not use all the ham and chorizo

Sprinkle liberally on all sides with salt, pepper and garlic 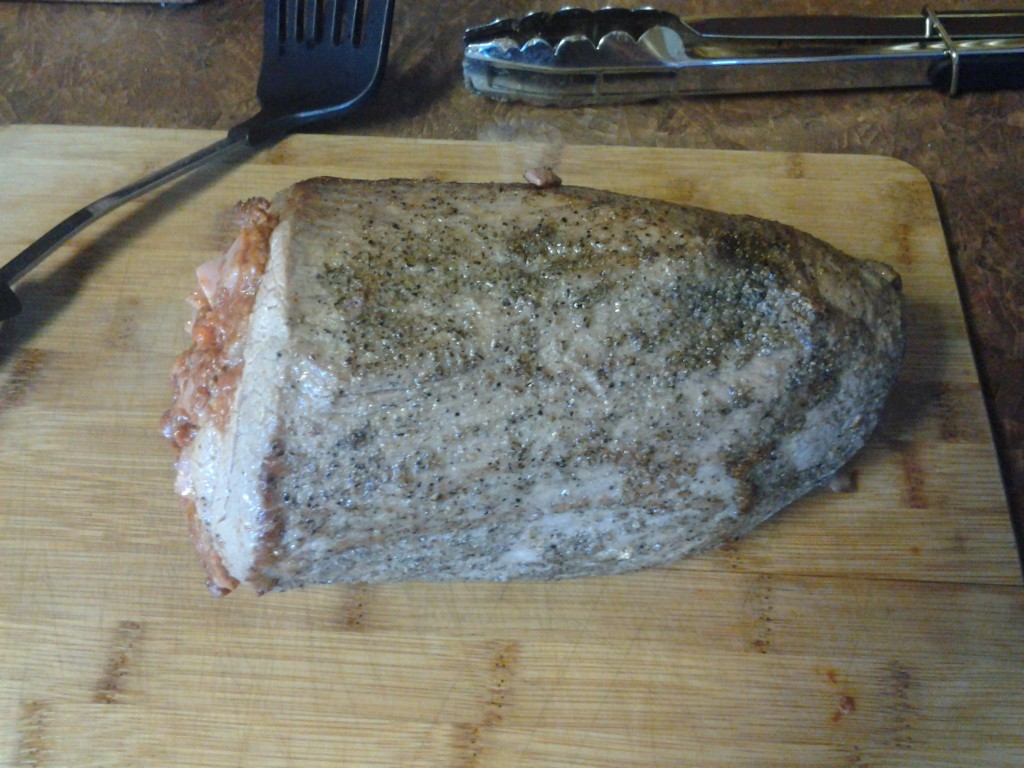 Brown all sides of roast in hot oil, being careful not to “squeeze” out stuffing when turning 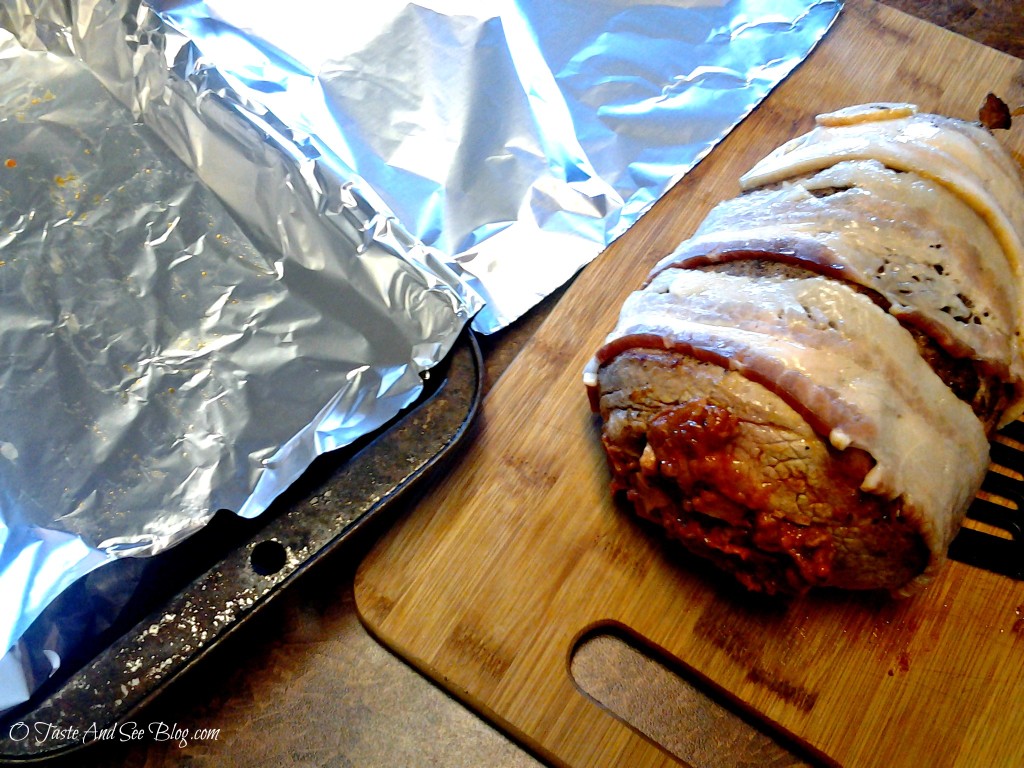 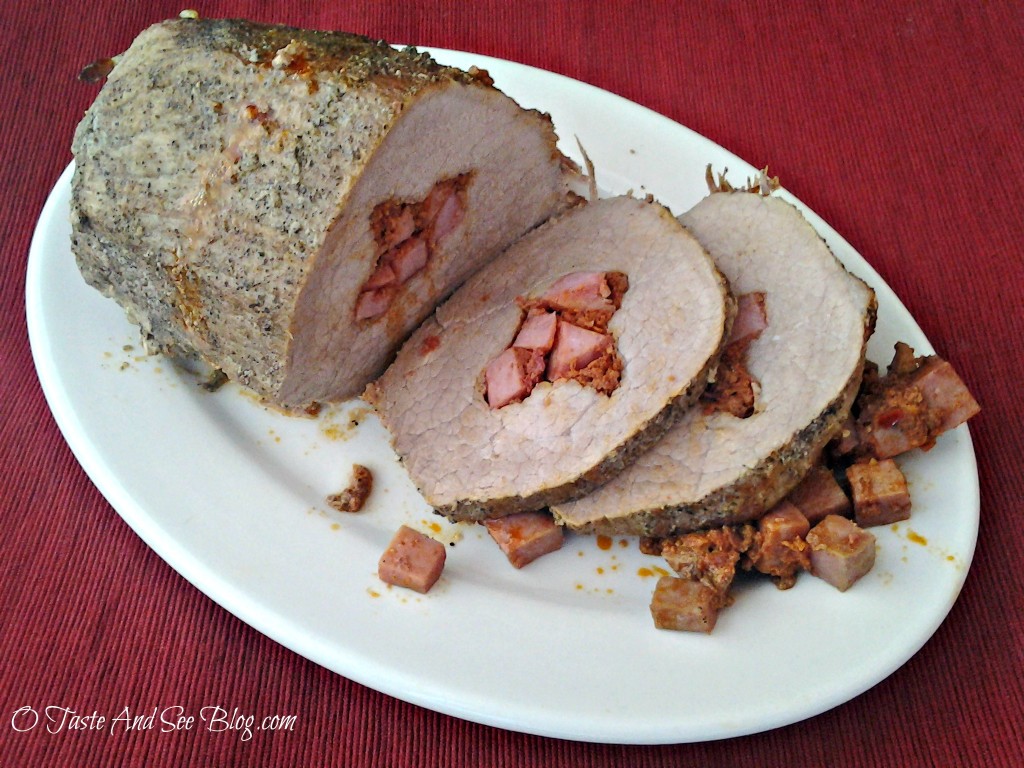 When done remove from foil and slice

The drippings from the roast can be made into gravy

We serve this with traditional Cuban Black Beans and Yellow Rice.  I’ll get around to posting the black beans eventually.

Tomorrow, last but not least….The Present… which did not come from the Amazon wish list he emailed me!