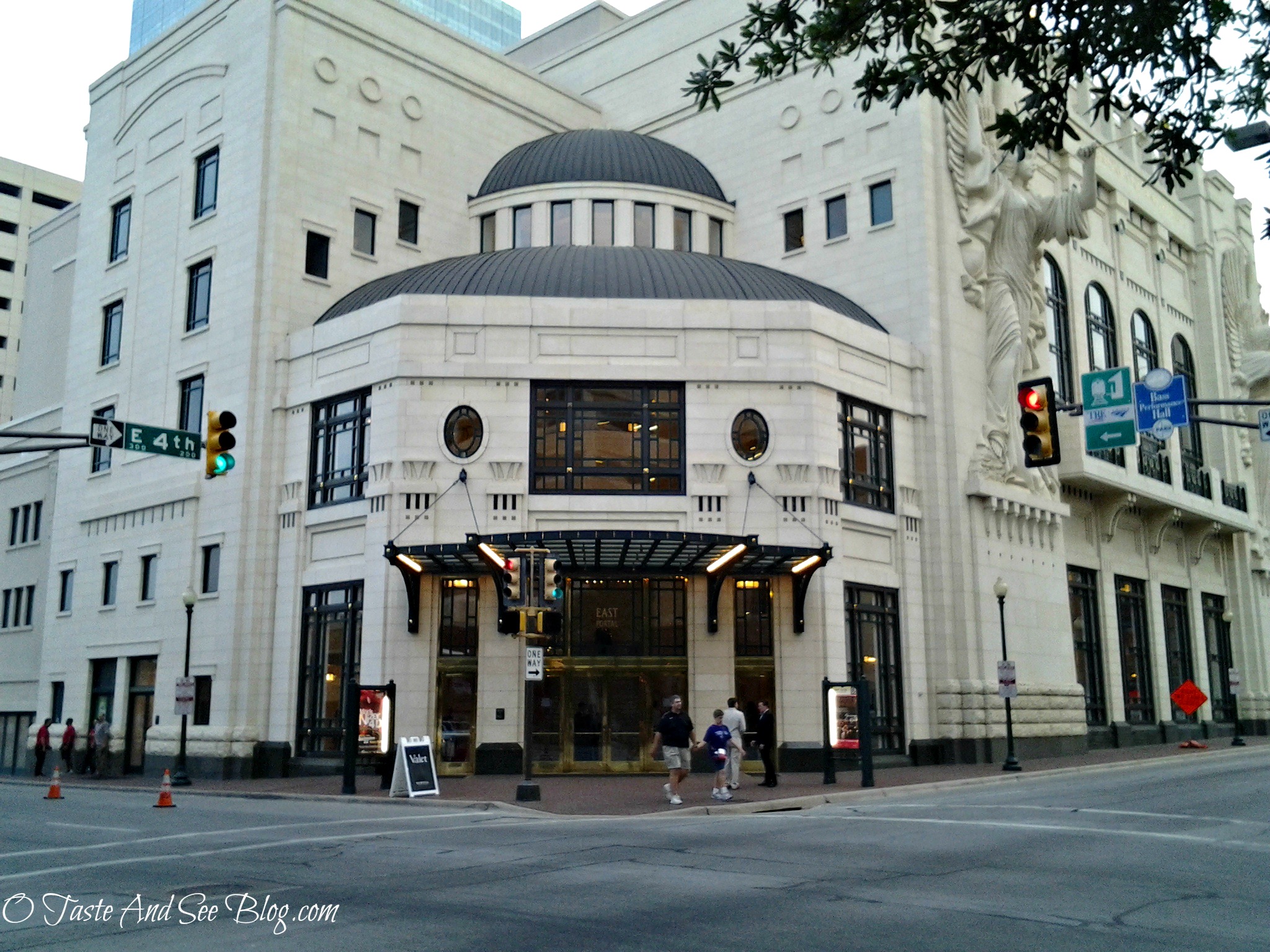 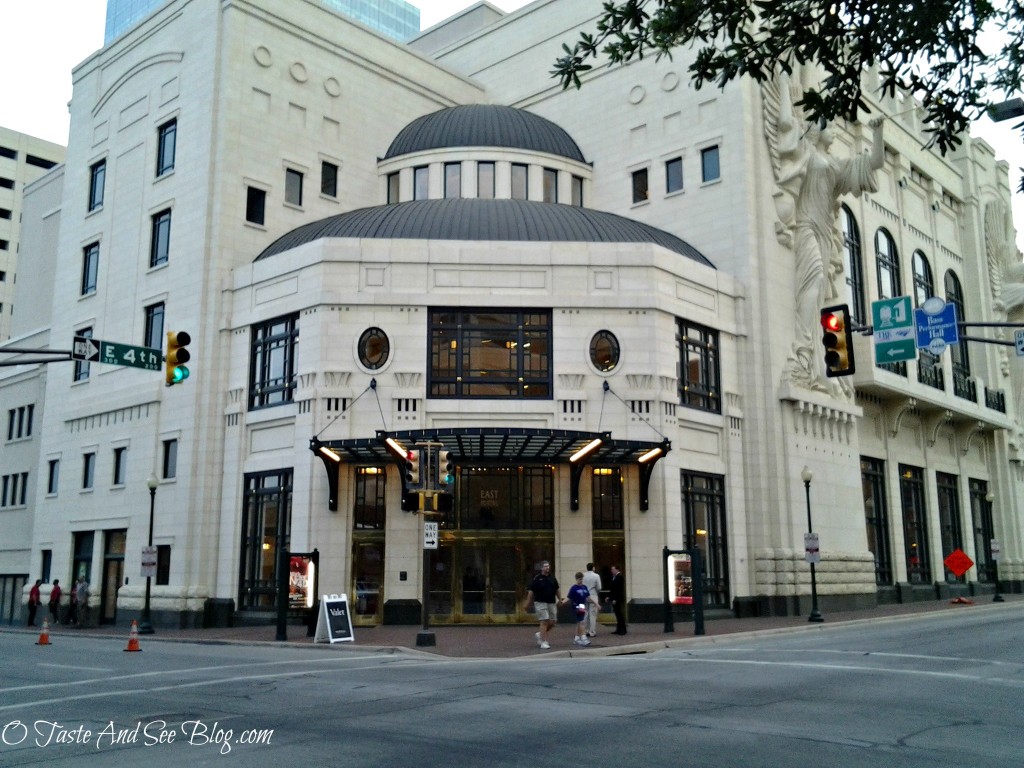 My husband and I have tried to cultivate in ourselves and our children a love and appreciation for good music and art.  We are blessed to live in an area rich in “cultural” events.  A wide variety of museums, plays, symphonies and traveling exhibits are within minutes of our home.  We are “down to earth” folks that enjoy the arts when time and money permit.

A couple of years ago we began attending the occasional symphony.  We started with an outdoor casual symphony but we really got “hooked” after our oldest daughter won tickets (twice) from the local classical radio station.  We were able to go a few more times through discount ticket offers or by sitting in the upper balcony.

This summer, after receiving the symphony brochure in the mail, my husband decided that instead of buying anniversary gifts for each other, we should get two “Season Tickets”.  We would take turns going with each other or one of the children.  The first symphony was a few weeks ago and it was decided that our middle daughter and I would attend. 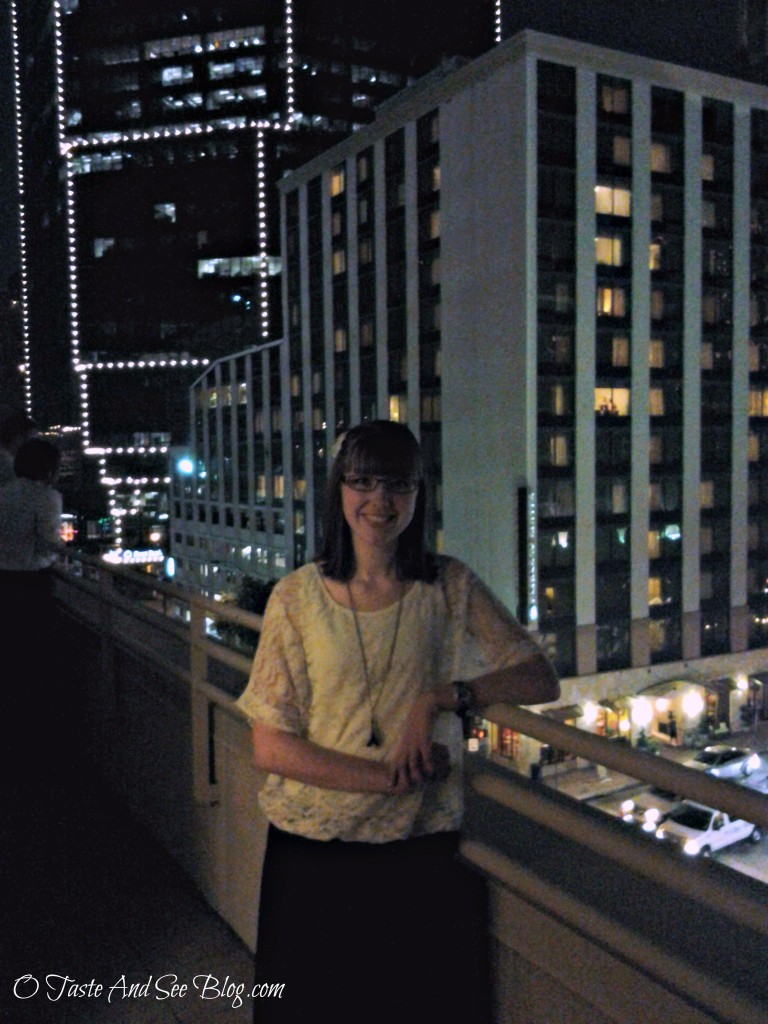 Going to hear the music is great but we also enjoy “dressing up”….and if you’re all dressed up you might as well make the most of it, right?  So, we decided to go to dinner before.  There are several wonderful places to eat downtown but one in particular that my daughter had wanted to go…Uno Chicago Grill!

It’s only about four blocks from the performance hall so we were able to park and walk to both.  When we arrived at the restaurant they were very friendly and asked if we were celebrating something special, since were were “all dressed up”.  We explained that we had tickets to the symphony.  Our server was wonderful and very conscious of our time. 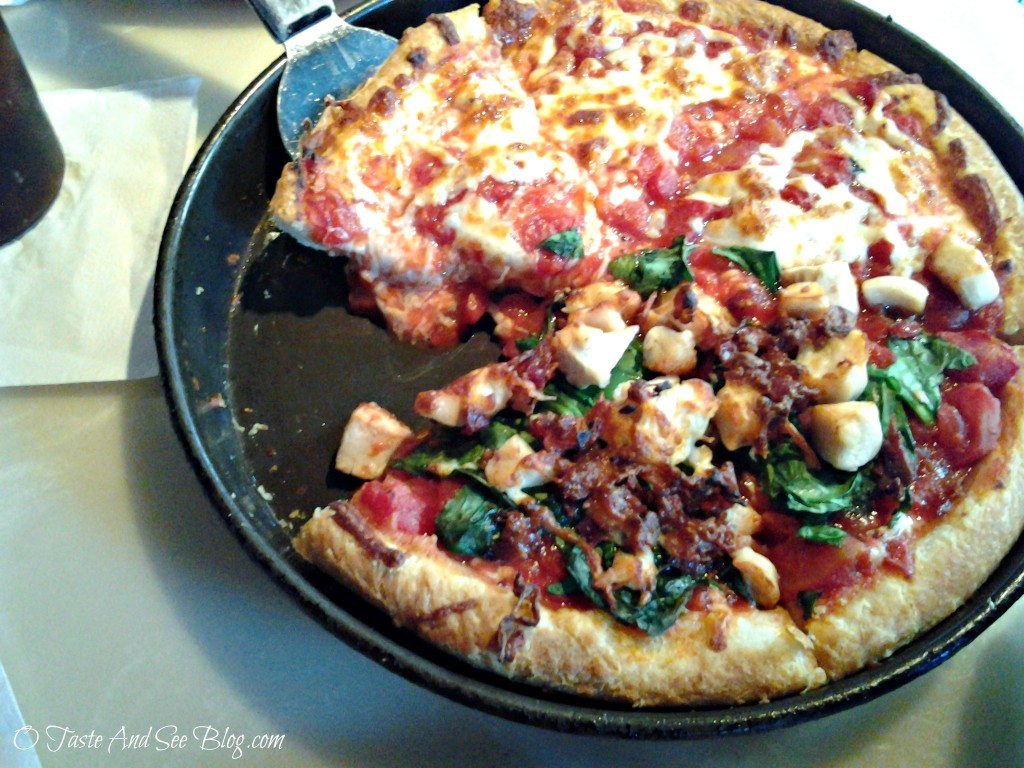 We knew we were going for the PIZZA….  Deep Dish Chicago Style Pizza.

What’s different about Chicago Style Pizza?  The crust, it’s not your typical deep dish crust.  It has a flaky texture and almost “buttery” taste.  It’s like combining a really great pizza crust and the an amazing croissant.

The pizza is very filling, so we decided to get a small and share it.  We could chose three toppings each. My daughter doesn’t like a lot of “extras” on her pizza.  All their pizzas come with chopped tomatoes and cheeses, which she decided was enough for her.

I was very excited about the toppings.  There’s one topping I like that NOBODY else in my family wants on pizza…spinach…so for my three toppings I chose chicken, bacon and spinach. It was delicious! 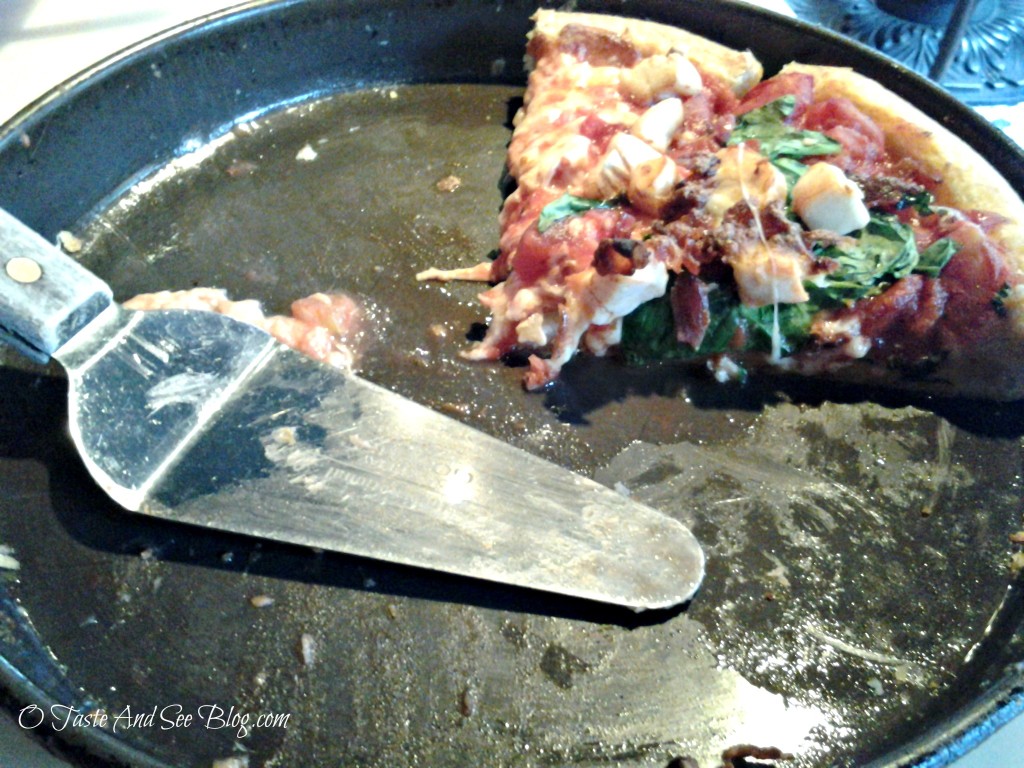 We thought we could eat it all but decided to save a couple of pieces in order to have room for dessert. 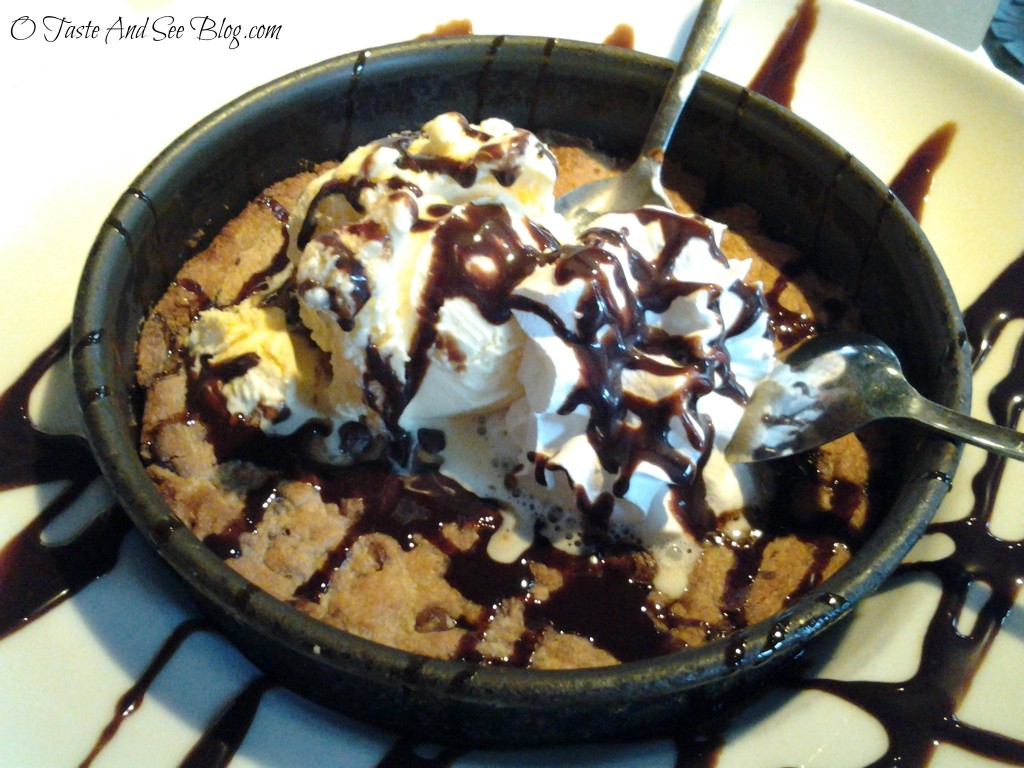 We decided on the Uno Deep Dish Sundae

It was huge!  We were very glad we had decided to share.  It’s a giant chocolate chip cookie, served warm, topped with vanilla ice cream, whipped cream and chocolate sauce….AND it’s as good as it looks! 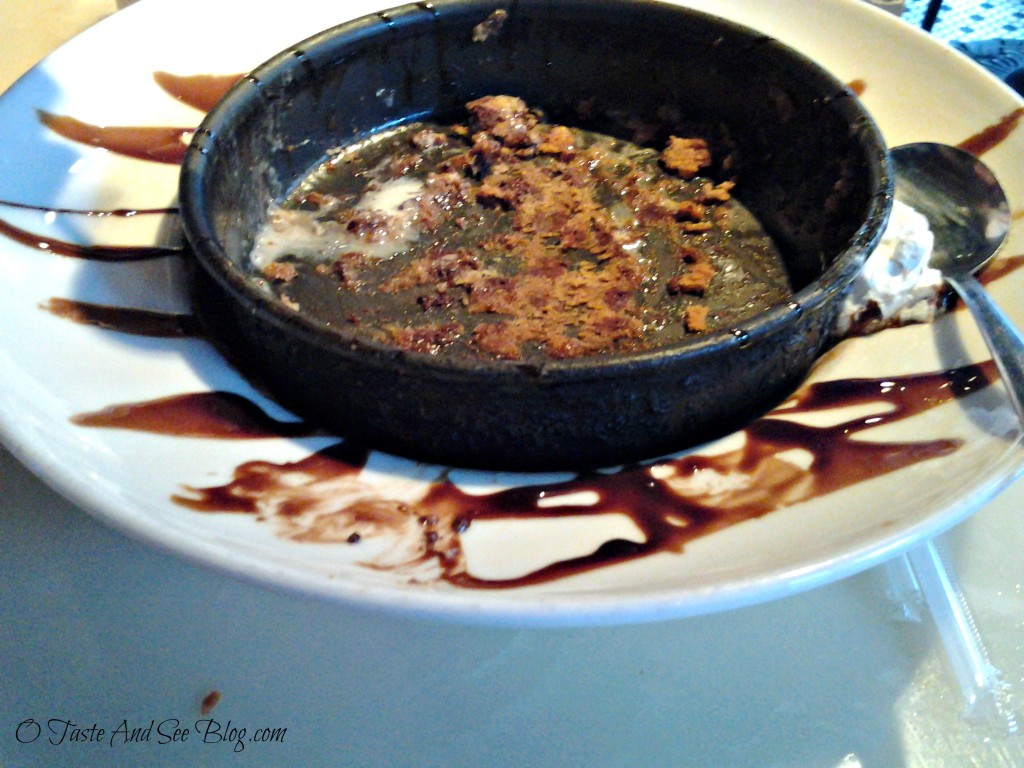 We didn’t have any trouble finishing it off!

As we prepared to leave, with our leftover pizza in hand, the hostess very thoughtfully offered to keep our box for us until after the symphony.  I thought this was very gracious and thanked her, but because they had been so considerate of our time and we were parked closer to the concert hall, we were able to drop it off at the car before the symphony started.  We arrived at our seats in plenty of time to look over the program before it started.

(I would love to insert the picture here that I took of the two of us in our seats, but it was very dark)

The better part of the first half of the concert was not your typical “classical” music.  The composer was there that night and explained how he came to write the pieces.  He wrote music, sung by a soprano, for six poems by the Irish, Twentieth Century poet, W. B. Yates. The title of the first poem was, “He Wishes His Beloved Were Dead”.  I’m not really a fan of “modern” literature or “modern” classical music.

The second half of the concert was music by Johann Strauss, which we enjoyed VERY much.  The Ft Worth Symphony has wonderfully talented musicians that do an amazing job no matter what they are playing.